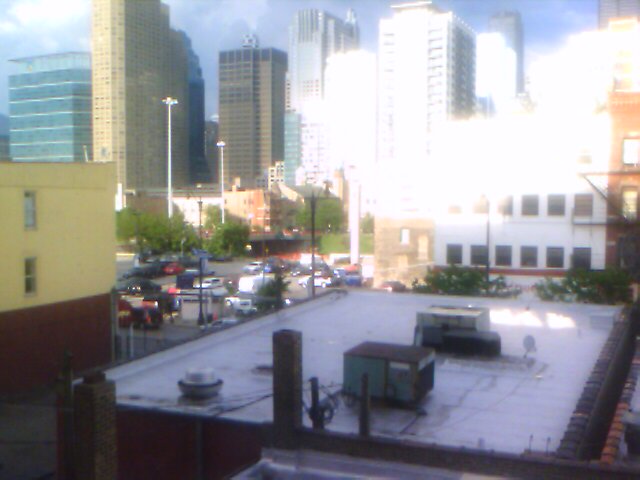 Just testing my mobile blogging capabilities on my Cingular 8125. Finally got the webmail to work.

The US Senate has proposed a law to make English the US's official language for government. While many social scientists of nationalism have discussed the importance of "common" language(s) for a unified national identity, I wonder if such approach is consistent with the reality of today's transnationalism and global competitiveness.

According to the 2000 Census, over 47 million people speak a language other than English at home. This fact is used to alarm the public about the growing fragmentation of US due to immigration. Yet, the census does not account for the fact that some of those people could be bilingual or multilingual. In my household for example, my husband, who is Ethiopian, and I switch between English, Amharic, with snatches of French. If one looks at the statistics on those who speak a language other than English at home, nearly half of them also speak English very well. While people would not disagree with the dominance of English as the "unofficial" language of the US and that perhaps that dominance should be officially recognized, I wonder about the intent and policy implications of such a move, as Spanish has become the 2nd unofficial language of the US.

Is this move by the Senate merely a symbolic gesture, a PR move, to guard against the backlash of giving million of undocumented immigrants amnesty? Or is part of a current trend of polictics of exclusion, which has the US writing laws whose purpose is to exclude people from receiving government services and civil benefits? This is what is unclear about the  proposal and is not being discussed.

In the DforD voting work, providing access to ballots in multiple languages has been a key issue in terms of both legal requirements of non-discrimination and the actual layout and content of the ballots. If all government business is to be conducted in English, what does that mean for providing election materials in languages other than English? Do we declare Spanish as our official second language? Mandarin as our third? Do the states begin to create a list of their other official languages to avoid violating the 1st and the 14th Amendments?

Multilingualism may be attained by simply diversifying the languages on offer in a particular school or educational system, or by encouraging pupils to learn more than one foreign language, or reducing the dominant position of English in international communication. Beyond this, the plurilingual approach emphasises the fact that as an individual person’s experience of language in its cultural contexts expands, from the language of the home to that of society at large and then to the languages of other peoples (whether learnt at school or college, or by direct experience), he or she does not keep these languages and cultures in strictly separated mental compartments, but rather builds up a communicative competence to which all knowledge and experience of language contributes and in which languages interrelate and interact. In different situations, a person can call flexibly upon different parts of this competence to achieve effective communication with a particular interlocutor.

It is the tendency towards binary thinking that leads the US government, informed by pollsters, to think that singing the Pledge of Allegiance in Spanish is somehow unAmerican. From my marketing consulting days, the importance of plurilingual approaches to reaching particularly the Hispanic market has proved lucrative for business and a distinct competitive advantage. Has business become more inclusive and perhaps enlightened than politics because it directly engages with the transnational social reality? Even it is to get people to buy more stuff?

As a country of (forced and voluntary) immigrants meeting indigenous peoples, America has always been transnational. Policies of exclusion has been part of that history, but I always thought that the promise and hope of the US is that it became increasingly more inclusive. A plurilingual policy reflects better the promise of American democracy, where the presence of no official language creates not a Tower of Babel, but rather a fluidity of communication where people speak 3 or more languages for inclusive interaction and understanding.

My airline tickets arrived today. I'm so excited. Once you have airline tickets, the trip is all of the sudden very real. Extra bonus is that my flights are mostly on United and Lufthansa, so I will retain my premier status on United. Sadly, we will be flying throughout Europe. I was hoping that we would take trains and ferries. The efficiency of the airline system confirms that this is a "business" trip rather than a vacation, so I'll just have to take the trains on another trip.

I am coming across some great research sites to share.
The official site of the city of Bratislava, Slovakia.  I will miss the Sting concert there at the end of June.

I have to finish two pieces of writing before concentrating on more European research.

In this past weekend's NYTimes book review, there was a review of Daniel Gilbert's Stumbling on Happiness. The premise of the book is that people are unhappy because (1) we don't want the things that make us happy and (2) the things we think we want (more money, cars, and fame) don't actually make us happy. This is because we (human beings) are delusional; we imagine mistaken futures, regardless of what our experience tells us (ex.  I will be more beautiful if I have a red sports car with leather seats.)

What fascinates me about this argument is that imagining the future is the primary act of creativity. In my class on Design Anthropology that I taught in 2004, we had a section on the origin of creativity. The argument of some scholars, like Dr. llona Roth and those of The Imaginative Minds: an Interdisciplinary Symposium, is that the emergence of creativity is tied to the ability of humans to imagine a future:

A number of researchers have identified the period between 300,000 and 200,000 years ago as a further crucial evolutionary stage, coinciding with a significant increase in brain size. By this time early humans had developed the capacity to live in complex social groups. The ability to imagine the possible outcomes of different actions, or the possible responses of peers would give these early humans the selective advantage of control over physical and social environment, uncompromised by expenditure of energy in physically enacting and evaluating alternative outcomes. Robert Foley has recently described this emergent capacity as ‘what if?’ reasoning, emphasising its role in enabling individuals to consider and decide between hypothetical actions and future events. Mithen (1998) and others have emphasised the central role of theory of mind - the capacity to understand (imagine) the thoughts, intentions and behaviour of fellow humans- in providing for communication and co-operation between group members.

This leads me to the question of the interplays of research and design. As creative thinkers, designers do excel at developing "What if?" scenarios. Yet sometimes designers forget that others can excel at "What if?" scenarios. I ran into this a bit with my graphic design students this fall who believed that since I did not study design that I had nothing to say about their creative process.

There is also a designers' preference for creative thinking without the interference of  the "experience" of others. This varies ,of course, across design fields. I find graphic designers resent interference the most. Industrial and experience designers resent it less. Part of this I think has to do with the perceived complexity of the problem (i.e. designers want the assistance of research when it can beef up their confidence).

Yet, the real fights I've seen or participated in with designers has had to do with a researcher "quashing" their what if scenarios with small doses of experience (i.e. reality). Yet, the purpose of research is to help ensure that the imagining of the future is not a mistaken one.

So cynically, I wonder who is actually happier, anthropological researchers or designers? It seems that almost every religion says that to minimize one's delusions is to maximize one's happiness. But then again, how do you change the future if you're not a little delusional?

In preparation for my trip, I have been doing research on national design policies. Ken Friedman (Professor of Leadership and Strategic Design, Institute for Communication, Culture, and Language at Norwegian School of Management and the Center for Design Research, Denmark's Design School) uploaded to the anthrodesign list the design policies and reports for Denmark, Finland, and Sweden. Peter Boersma an experience designer in the Netherlands, sent me a copy of the design policy created by Premsela Foundation, which is funded by the the Dutch government and the city of Amsterdam. I had gathered the policy for South Korea and Britian as well.

There was an effort to look at Innovation policy in the US in 2005. Senator Lieberman introduced the National Innovation Act of 2005, but even its focus was on engineering as opposed to design.

In the next couple of weeks, I will be interviewing Ric Grefe of AIGA, Kristina Goodrich of IDSA, and Patrick Whitney from IIT Institute of Design on issues regarding civic design, US governance,  and national design policy. It will be interesting to explore how a US design policy would work if there was one and how it would engage with pretty well established European design policy.