I have finally had a chance to process my diary of my first couple of days in Melbourne. I arrived on Thursday. This covers Friday, Saturday, and the Walk on Sunday.

Friday morning, I spent opening a bank account with the friendliest bank associate ever. The bank is in the middle of the Melbourne version of “Greek Town.” Kyrie was this portly Greek who had to “hide” from all of the little old Greek ladies who came into the bank. When he was helping me, it was endearing to watch them hover in order to greet him or ask his help translating the service they wanted. He was very open and friendly, telling me about his struggle with his new diet and lifestyle change to loose weight, his “Greek” superstitions about not crossing black cats, and his parent’s business.

I had to choose my office either on the 3rd floor or the 5th floor. 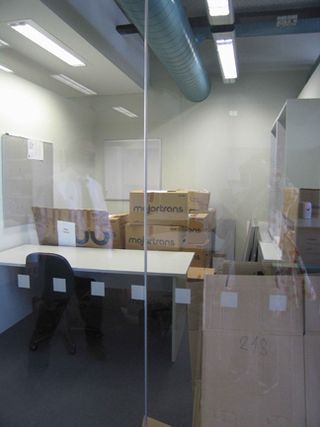 I ended up choosing the 3rd floor mainly because it was more private.  The 5th floor space, although much cooler in look and feel, had an open ceiling, which meant that the private conversations that I would need to have, especially as Assoc. Dean, would not be private enough.

Having watched too much Home and Garden TV. I mapped it out in millimeters and sketched its layout. The space feels to cold and corporate in relationship to the warm and personal discussions that will take place in it. My experience of being faculty is that you are often a therapist for your students and colleagues, thus it is important to cultivate a warm and private “safe” space for people. The next step I hope is being able to decorate with more colorful furniture.

The joy of my day was getting to see Jerry in quarantine. I took a taxi to a neighborhood call Spotswood, which is very industrial. My taxi driver was this Ethiopian woman named Meseret. She was so shocked that I could speak Amharic, and even flattered me that my accent was authentic. Of course, she continued to speak to me in English with some Amharic words thrown in. She told me that there are about 25K Ethiopians in Melbourne and about 5-10K in Sydney. They like Melbourne better because it is more diverse. They and other black migrants live on the outskirts of downtown in an area called Footscray.

Visiting Jerry was both joyous and heartbreaking. He had a very difficult flight. When I saw him, his nose was all scratched up from be jostled around. He had shitted in his crate so badly that they had to wash it down with a fire hose when he arrived. His toys and bedding had to be put through the wash three times. But they had bathed him and he seemed less nervous (plus ate all his food) the next morning, so that they were no longer worried. The dog kennel looks like a prison, but they keep it clean and warm. 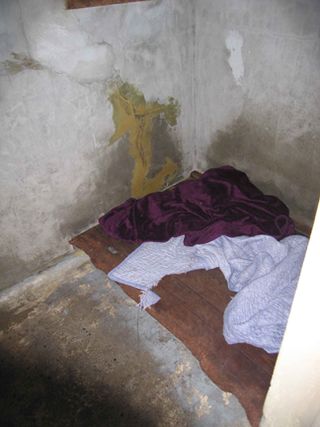 Jerry and I were so happy to see each other. They had an exercise yard where we could play. It is such a joy to watch him run. I get to visit him twice a week, which I’ll do on Fridays and Tuesdays. The staff are very affectionate towards the animals. You can tell that they really care, so I am less worried.

The journey back home from the quarantine station was a bit of an adventure because it was near the 4pm taxi changing shift. Meseret came to pick me back up, but she said that she had to drop me off at Footscary  where I could get another taxi to go to Prahran, the neighborhood where I am staying.  It was like walking through Adams Morgan in the 90s in D.C. The neighborhood was a mixture of Ethiopians, Somalis, Vietnamese, Chinese, and Indians. She dropped me off at the main shopping district where I waited for taxis along with a Somali family. Footscray is considered the “black” part of town from which white Australians stay away. But Meseret indicated that she has never experienced any personal racism (as opposed to latent prejudice) in Melbourne per se, just a sense of exoticism that comes with being African (they think she is often South Asian).

After three tries, I found a taxi willing to take me to Prahran. He had a taxi change time of 4:30pm, so he thought he could make it. The driver was named Mustafa. After initially confusing me for Somali, he described how American blacks are Africans as well. He then offered wonderful praise for Melbourne and Australia because they provide universal healthcare. He thought that the U.S. was a terrible place because they “treat people like dogs.” When I pointed out how President Obama is trying to change that, he went into a tirade about American racism and how they want to assassinate Obama the first chance they get. He then talked about how the U.S. Dollar is worth nothing, while at the same time trying to get me to sell my dollars on the black market. Of course, his perspective is 100% accurate, but it made me realize how optimistic I feel about the U.S.

There was one interesting interaction in the taxi. He had asked me which route I wanted to take to avoid traffic in the City. I said to him, “I’ll trust you.” He then said to me, “I was going to take the toll road which would have costs you $4 more, but because you said that you trust me I’ll take the shorter route.” That is when he began to open up about his feelings about the U.S. versus Australia.

He, of course, could not take me all the way because there was a lot of traffic in the City and he was coming close to his 4:30 change time. So he dropped me off on High Street, where I took the tram two stops to Prahran. I was worried because I did not have a tram card, but he told me that the trains were full so you won’t be asked to pay. When I got on the tram, there was no where to take cash, so I got on and off without having to pay. I don’t like not paying, so I will get a monthly pass ASAP.

When I got home in the evening, I cooked dinner of fresh pasta with pesto sauce. Earlier I had bought this amazing ginger barley tea. Melbourne has the best tea shops that I’ve ever experienced. They make Argo Tea feel like McDonalds. The one that will become one of my favorites has little pots of teas made so that you can sample them. I then spent a couple of hours finishing the novel, Divisadero by Michael Ondaatje, who wrote the English Patient and Anil’s Ghost, both of which I have read. I tend to go to sleep around 7pm, which is why I keep waking up at 4am. Note: Australian TV sucks. There is really never anything on the 5-6 channels that they have except sports, kid shows, news, and televised movies. I will have to find the Aussie version of Netflix.

Saturday was blistery, rainy, and cold outside. I have generally been freezing in the flat which only has room heaters not centralized heating. I sleep with two down comforters and a blanket over me at night. Yet it is still warmer than outside. Thus, I decided to spend the day in bed reading. Between 6am and 4pm, with only bio-breaks for food, tea, and the bathroom, I started and finished the novel, The Girl with the Dragon Tattoo by Stieg Larsson. It is a mystery that takes place in Sweden. I enjoyed reading it although it had a very dark mood. The moral subtext of the novel explored the violence against women in Sweden. Each chapter presented some statistic on the number of violent incidents against women, then the writer would elaborate on the theme more deeply through the mystery. The main character Mikeal Blomkvist is a financial journalist. Another subtext of the novel is the critique of financial journalism which he feels acts like the sycophants of business CEOs instead of taking them to task for their corruption. I found the critique appropriate to the way the financial pundits have treated many CEOs in the financial crisis. The author died after completing his third novel in the series, so I have to find and read the next two novels. I really like his writing, or the translation of his writing.

I went with Ken and Ditte to the Walk for Harmony march to celebrate diversity. It was really cool to see how diverse Melbourne is. The Hmong, Chinese, Poles, Jews, Oromo, Eritrean, Muslim, Gong Fa, Taiwainese, Greek, Indian, Brazilian, and other ethnicities were all in the house, so to speak. I have provided a link to my Facebook photo album, which best captures the spirit of the event. Melbourne is really a cool place.

More on the rest of the week tomorrow.

Great to hear that you're getting settled in. Looking forward to hearing more about your life there as things progress!