Nick Law is from Australia. Was a designer in Sydney and learned how to hate advertising. Went on walkabout in England. Learned to hate advertising. Hated graphic designers because thought helvetica was a concept and made more money than he did. He is funny. Came to US and worked in Interactive with lots of men with food in their beards. Joined R/GA since 2001.

Has production company history so very good at making. Company where practice comes first and theory falls out. Then moved more into strategic thinking. Ended up in advertising more than design. The most important technology is TV, which is about ability to tell a story. They became good story teller because of format. Art director and copywriter would hand off (conceptual) story to someone else to develop. Then moved to system, which they are doing is more like designers. You generally don't have people who can do both.

Grid X is story --- system  Grid Y is think | make. The interesting place is think system quadrant. All the quadrants are important.

Nike Plus platform is something which is a new media based on understanding of human behavior. It is a design way of thinking. Bring together runners through multiple interactive media, Human Race, is to push people into platform. Use campaign to nourish the platform. It is the interplay of advertising and design. The future is not in silos. Challenges are culture and choreography of talent.

Talked about campaign, thatsnotcool.com. a digital platform to deal with digital stalking and sexting.

He was great and funny in the Aussie way. It was good to see interactive media on the main stage. 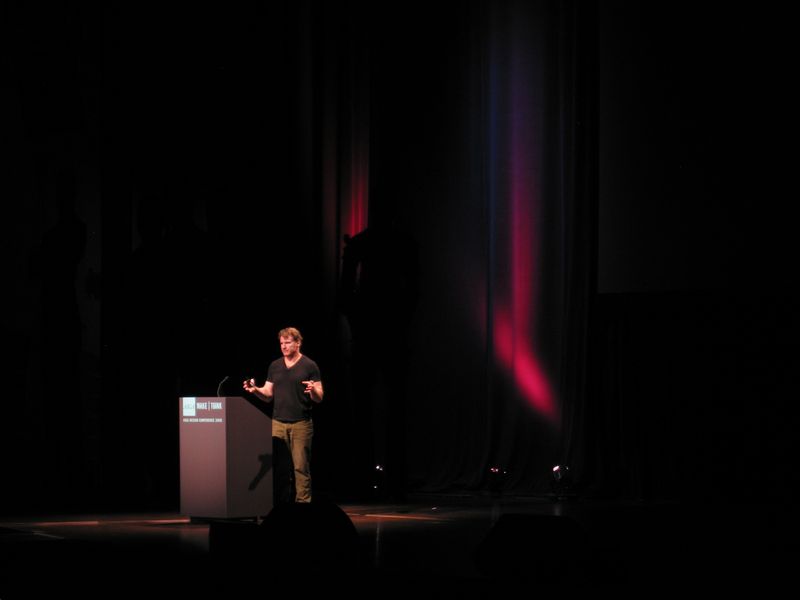