Sudhir, Ira, and I got back very late from visiting, which was tough on Ira who had a 9:00am class the next morning.

Sudhir and I had to leave later to the UnitedWorld Institute of Design, a new design college on the outskirts of Ahmedabad, where I was to give a lecture on Cultures-Based Innovation. The UID was established by former instructors from National Institute of Design. NID has a rule that you have to retire after the age of 60 years, so these former teachers decided to partner with United Group and other industry advisors to start a new college. It is really new in terms of just welcoming its first cohort of 60 students and the buildings themselves, which have been built, but not painted. 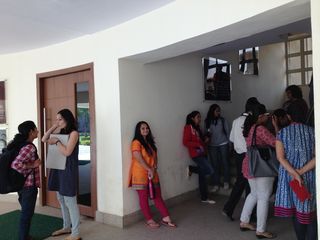 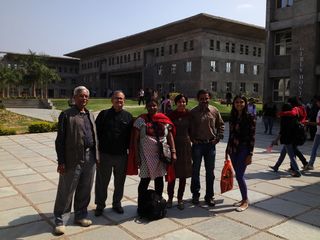 Sudhir, some staff and students, and myself in the courtyard of UID

The lead Mentors and Principle Faculty whom I met at UID are Prof. Pankaj Patel, Prof. Pradeep Choksi, and Prof. J.G. Sevak. I also met some of the younger faculty such as Ms. Kakoli Biswas, a textile designer. The lecture went very well, except for some minor technical difficulties because I did not use my laptop originally. The Q&A was good, with some insightful questions about India, design, and culture. Based on the tradition at NID, the UID curriculum includes a short project in which students have to work with an Indian village. So as I noted to the, they are doing Cultures-Based Innovation, my role is to provide a common term and show what projects are happening in other places in the world. They liked that message.

Sudhir then did a long discussion, with me chiming in, about being a designer and what it takes to be a successful professional designer. It was disheartening for me to hear that they students had chosen design because they did not like to study, or mathematics, or because they have more freedom, etc. I mean those of valid reasons, but it contributes to the idea that design is not an intellectual activity. The students were not able to articulate what was design's "super power" compared to other fields. But then again, most professional designers cannot define that as well.

One of the most impressive features of the places in India that I have seen is its architectural heritage. The Adalaj StepWell is another one of these amazing structures that demonstrate how the Indian people got sustainability before it became a buzzword. The temperature drops as you descend down the five stories of intricately carved figures, reliefs, and columns. Really, it is best to just post photos, as writing about it does not do the place justice and besides from the info from the wikipedia entry, I don't really know that much about it. 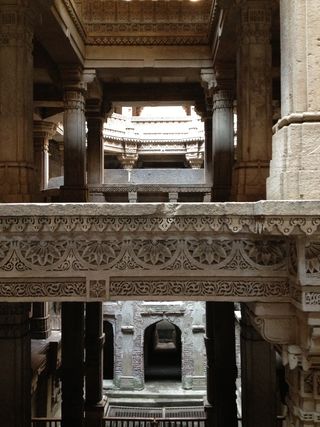 Beautiful detail work of the StepWell Looking up to see all the floors 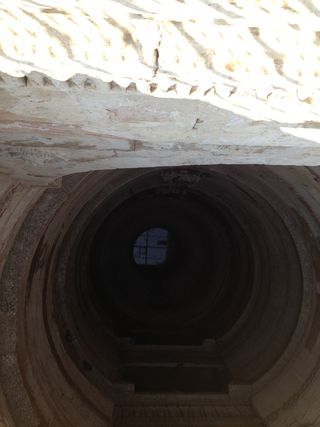 Looking down into the well 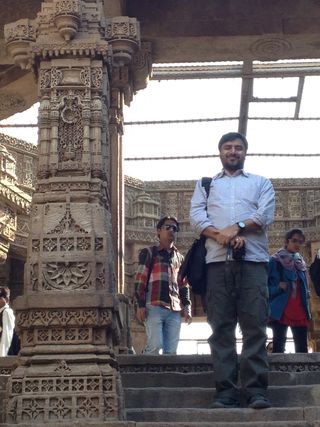 Just to show there were some people there, include Sudhir.

The last trip for the day was a visit to the Ashram that Gandhi founded and stayed in from 1917 to 1930. The Ashram is a museum but also a place for reflection. It is located on the banks of the Sabarmati River, with tranquil views. Once you enter, the first thing you see is the museum and Gandhi interpretation centre on the left and the buildings where Gandhi and his followers stayed on the right. Sudhir who used to come here when a student at NID, said that the museum was new. The rules of the Ashram are wonderful guides to life and I can see how they have influenced the thinking of the older designers whom I have met, especially the one about using local products. These are listed from the organisation's website (http://www.gandhiashram.org.in):

Truth is not fulfilled by mere abstinence from telling or practising an untruth in ordinary relations with fellow-men. But Truth is God, the one and only Reality. All other observances take their rise from the quest for, and the worship of, Truth. Worshippers of Truth must not resort to untruth, even for what they may believe to be the food of the country, and they may be required, like Prahlad, civilly to disobey the orders even of parents and elders in virtue of their paramount loyalty to Truth.

Mere not-killing (the animals) is not enough (for this observance). The active part of non-violence is Love. The law of Love requires equal consideration for all life from the tiniest insect to the highest man. One who follows this law must not be angry even with the perpetrator of the greatest imaginable wrong, but must love him, wish him well and serve him. Although he must thus love the wrong does, he must never submit to his wrong or his injustice, but must oppose it with all his might, and must patiently and without resentment suffer all the hardships to which the wrong doer may subject him in punishment for his opposition.

Observance of the foregoing principles is impossible without the observance of celibacy. It is not enough that one should not look upon any woman or man with a lustful eye; animal passion must be so controlled as to be excluded even from the mind. If married, one must not have a carnal mind regarding one’s wife or husband, but consider her or him as one’s lifelong friends, and establish relationship of perfect purity. A sinful touch, gesture or word is a direct breach of this principle.

4. Control of the Palate

The observance of Brahmacharya has been found, from experience, to be extremely difficult so long as one has not acquired mastery over taste. Control of the palate has therefore been placed as a principle by itself. Eating is necessary only for sustaining the body and keeping it a fit instrument for service, and must never be practised for self-indulgence. Food must therefore be taken, like medicine, under proper restraint. In pursuance of this principle on must eschew exciting foods, such as spices and condiments. Meat, liquor, tobacco, bhang, etc are excluded from the Ashram. This principle requires abstinence from feasts or dinners which has pleasure as their object.

It is not enough not to take another’s property without his permission. One becomes guilty of theft even by using differently anything which one has received in trust for use in a particular way, as well as by using a thing longer than the period for which it has been lent. It is also theft if one receives anything which he does not really need. The fine truth at the bottom of this principle is that Nature provides just enough, and no more, for out daily need. Hence it is also a theft to possess anything more than one’s minimum requirement.

This principle is really a part of (5). Just as one must not receive, so must one not possess anything whish one does not really need. It would be a breach of this principle to possess unnecessary foodstuffs, clothing or furniture. For instance, one must not keep a chair if can do without it. In observing this principle one is led to a progressive simplification of one’s own life.

Man is not omnipotent. He therefore serves the world best by serving his neighbour. This is swadeshi, a principle which is broken with one professes to serve those who are more remote in preference to those who are near. Observance of swadeshi makes for order in the world; the breach of it leads to chaos. Following this principle, one must as far as possible purchase one’s requirements locally and not buy things imported from foreign lands, which can easily be manufactured in the country. There is no place for self interest in Swadeshi, which enjoins the sacrifice of oneself for the family, of the family for the village, and of the country for humanity.

One cannot follow Truth of Love so long as one is subject to fear. As there is at present a reign of fear in the country, meditation on and cultivation of fearlessness have a particular importance. Hence its separate mention as an observance. A seeker after truth must give up the fear of caste, government, robbers etc and he must not be frightened by poverty or death.

Untouchability, which has taken such deep root in Hinduism, is altogether irreligious. Its removal has therefore been treated as an independent principle. The so-called untouchables have equal place in the Ashram with other classes.

In the Ashram caste distinction has no place. It is believed that caste distinction has caused harm to the Hindu dharma. The ideas of the superior and inferior status and pollution by contact implied in cast distinction serves to destroy the dharma of non-violence. However, the Ashram does believe in Varna and the Ashram dharma. The division of Varna is based upon occupation. One who follows that division lives by his parents’ occupation, not inconsistent with larger dharma, and spends his spare time in acquiring and advancing true knowledge as well as performing service.
The Ashram believes, as in the Varna, so in the four Ashrams of the Brahmacharya, Grihastha, Vanprastha, and Sanyasa. But the Ashram does not believe that life of renunciation can be lived in a forest only or by giving up performance of one’s duties. The Ashram believes that dharma of renunciation can be and should be observed while leading a normal life and that it alone is true renunciation.

The Ashram believes that the principal faiths of the world constitute a revelation of truth, but as they have all been outlined by imperfect men, they have been affected by imperfections and allowed with untruth. One must therefore entertain the some respect for the religious faiths of others as one accords to one’s own.

12. Physical Labour (this was added afterwards by Gandhi)

Man can be saved from injuring society, as well as himself, only if he sustains his physical existence by physical labour. Able-bodied adults should do all their personal work themselves, and should not be served by others, except for proper reasons. But they should, at the some time, remember, that service of children, as well as of the disabled, the old and the sick, is a duty incumbent on every person who has the required strength. Keeping in view this object, no labourers are employed in the Ashram, and if at all they are inevitably employed, the dealing with them would not be of an employer-employee. 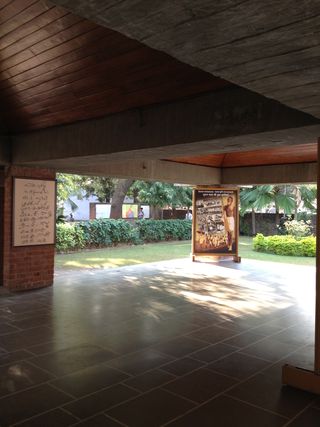 The Museum and Interpretation Center (look at Gandhi's handwriting) 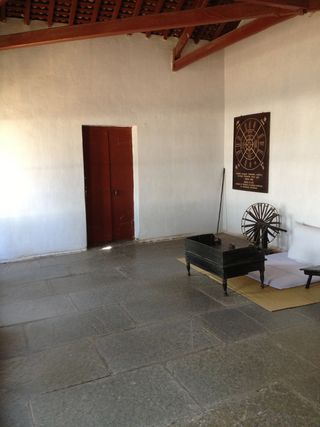 Image of the compound View of the river from the compound