Flying into Mumbai at night

I love flying to a city at night. As the plane descended, we flew into what I thought was a layer of clouds, but found out later was haze. The airport itself was like any other airport in the world, spacious, clean, geared towards shopping. Reflecting Mumbai's position as a global city, there were people from all over the world getting on and off planes.

I originally chose the hotel because of its distance from the airport (2 km) and that it was supposed to have complementary shuttle bus. Arriving at 10:30pm, there was no bus. But Mumbai has a unique for me taxi system. There are these pre-paid taxi stands at the airport. There you go and order a taxi. They give you a slip with the taxi number written on it and you go find your taxi. The second part of this system can fall down quite spectacularly if it weren't for the culture of service of enterprising taxi touts. A kind gentleman offered to show me where my taxi was for a tip. Of course, the tip was just as much as the taxi itself, but it's late, you're tired, and just want to get to the hotel.

After getting escorted to the taxi, we drive the 2km to the hotel. Two kilometers is much further than I thought when the taxi driver does not know where the hotel is located. I am glad for my anal retentiveness regarding having a two-page print out of all my flight, hotel, and talks information including addresses. For a moment, I wish I had chosen to stay at the Hyatt and the Hilton, whose familiar names reflect brightly in the night. But we pass them by and continue to weave through the traffic of cars, trucks, the mini-cabs whose names I do not know yet, and motorbikes, lots and lots of motorbikes.

Mumbai from the route from the airport seems under contruction itself. Large swaths of land are cordened off with metal, tarp, and bamboo fences and inhabited by all manners of construction machines. The taxi gets to the general area of the hotel and stops to ask his other taxi mates where it is. After gaining more directions, we continue to weave through narrow streets with mid-rise buildings and small neighborhood kiosks. We make the final twists and turns asking directions one more time before arriving at the hotel, Suncity Residency Hotel.

The security guard looks at me, obviously a foreigner, and waves the taxi through the gate.

The SunCity is a tourist class hotel, which is exactly what I wanted as I headed back to the airport in the morning. There is not much to say except that I loved the fact that they had a foot massager in the room. After getting on the internet, fixing a cup of Tetley tea (I am disappointed by the tea selections in the two hotels I have stayed in), and washing off the transit germs from my three flight, it was great to sit in my PJs and have the massager reduce the minimal swelling in my legs.

I woke up in the morning to the roar of motorbike engines and the smell of fragrant burning wood. It is the latter this probably reponsible for the haze in the photo below.

Mumbai during the day (finally photos) 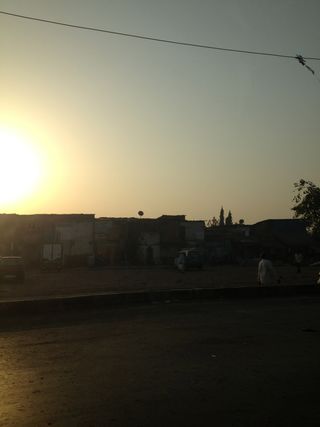 I love this quick picture of Mumbai at about 8:00am in the morning. We begin by comparing what we see to what we know before. Mumbai reminds me of both China and Ethiopia. The resemblance to China is based on the density of the people, the amount of contruction everywhere, and the crazy non-rules of the road driving patterns. The difference is that instead of bicycles you find more motorbikes in Mumbai. It also resembles Ethiopia in terms of the look and feel of the people walking, riding, chatting, brushing their teeth, selling stuff on the road, drinking tea on the streets. Someone raised a concern about being overwhelmed by India, but from the luxury of my taxi and hotel windows, I feel it is more familiar than strange. 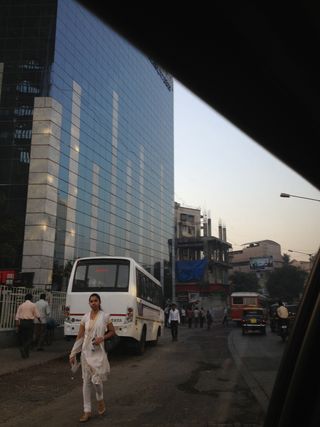 Lots of construction and people on the road in the morning 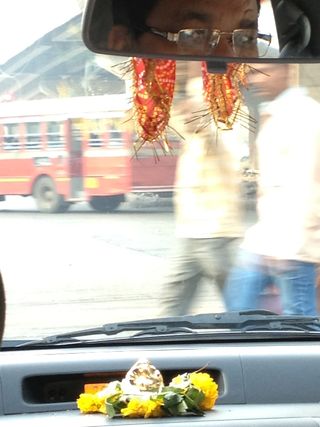 I wanted to capture the shrine for Ganesh on the taxi driver's dashboard. You find many images of the Gods painted on buildings and long ribbons of yellow and orange marigolds hanging from shops. When I left the hotel in the morning, one of the attendants was separating marigold blossoms for the shrine in the hotel. It reminded me of the shrine to Buddha tucked in the corner of the Ramada Inn Hotel in Hong Kong.

Back at Mumbai Airport

This time I came to the domestic terminal. I am really impressed with the service culture at the airlines and the hotels. Getting my ticket was simple and everyone was really helpful. There are separate security lines for men and women, which makes sense given that every woman is screened with the wand. The underwire in my expensive brassiers set them off every time. What was interesting is that there was only one line for the women and six lines for the men. I tried to do a quick count to see if that 6:1 ratio was warranted by the traffic of passengers. I don't think that is the case.

I arrived extra early at the airport, which is my habit because you never know if you can get an earlier flight. Or there is the time in Malaysia, where my original flight was delayed, which meant I would have missed my connecting flight back to Melbourne. Because I had arrived early, I was able to catch an earlier flight which got me to KL on time. But it gave me the opportunity to observe people. From my perch at the coffee shop, I was able feel the flow of my fellow passengers: parents trying to entertain their young children, business men setting pre-meeting game plans in English, teenagers glued to their Samsung smart phones (very few iPhones), grandmothers in bright saris and grandfathers in suits holding hands while watching for their call, Northern European tourists flipping through their guide books, Chinese businessmen reading English-language newspapers, and people getting in semi-orderly lines as their flights are called.

I appreciated the free Vodaphone internet connections, because it allowed me to finally check my email. The University non-international roaming policy is really terrible. I could not get the complementary wi-fi to work with my computer in the hotel. Thus I finally resorted to letting my partner know I made it safely via text message.

The plane to Pune was running 15 minutes late but the flight attendants were very gracious about it, so you did not feel overanxious. Luckily, I always travel with a book for these occasions. Current read is Lionel Shriver's The New Republic. She work We Need to Talk about Kevin. I like her sense of humour. The shuttle bus takes us to the plane where we walk up the "glamour stairs" inside the cabin. I always consider them glamour stairs because you always saw Hollywood stars waving from the stairs. Walking through the long expandable tubes is not glamourous at all, you feel like you are entering and exciting the colon of the airport. The flight took only 40-50 minutes.

You will have to follow my adventures in Pune in the next installment, where I discuss INDI Design and my friend Sudhir, my talk on Cultures-Based Innovation, and my tour of Pune today, including museums and Bollywood movies. More tonight.