It was dark when I arrived in Jaipur. Like Pune and Ahmedabad, it had a new airport as well. The prepaid taxi drove me to the Rani Mahal hotel, the heritage hotel that I had booked online. The concept of the prepaid taxi is such a relief in terms of reducing the anxiety of traveling and not getting ripped off by taxi drivers. It is a concept that they should establish elsewhere (Australia and the US) when coming from the airport. The hotel itself was extraordinarily beautiful. Words cannot describe it, so here are some photos. 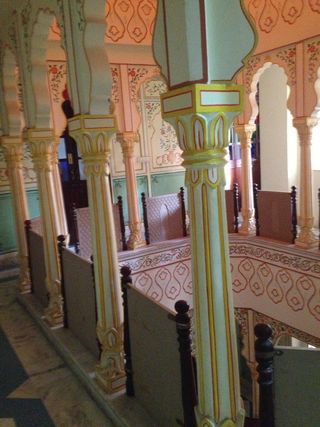 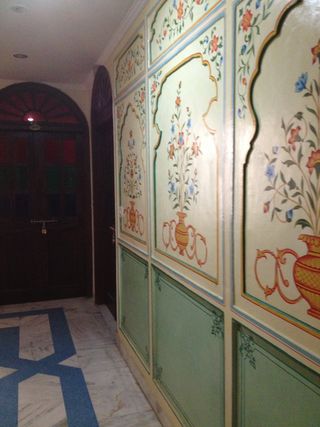 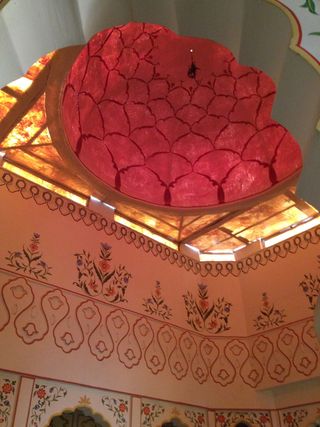 When I arrived, the owner/manager offered me masala tea and provided me with a menu to order dinner.  He put me in the suite room, which was this beautiful room with original painting of the same beautiful Queen in the other paintings in the hotel.

After eating, I was exhausted, watched some TV (kung fu of all things), and soon went to bed. Two things are very interesting about Indian TV. First is that there are probably over 100 channels in several languages. Some are devoted to playing the music scenes from Bollywood movies. The second was the number of commercials about making the skin of both men and women fairer. There is one ad for men to remove the tan from your face with a face wash. Another ad was for a deodarant that whitens your underarms. I knew about Indian colorism, but wow to see such blatant advertisment for men and women.

The next morning I got in contact with Shriya Nagi, the women who researchers, writes, and designs Pool Magazine in Jaipur. Thus she is the Jaipur branch of Sudhir’s company, Indi Design. We coordinated to do a little touring in the morning before my afternoon talk at the Indian Institute of Craft and Design. The day’s tour of Jaipur was planned because my original intention was to go to see the Taj Mahal in Agra the next day. But after talking to the hotel manager, I decided against going by myself.

Shriya arrived around 11:30am and we got a taxi to take us to the old city. Jaipur is beautiful with its salmon colored buildings. It does look pink in the evening sun. 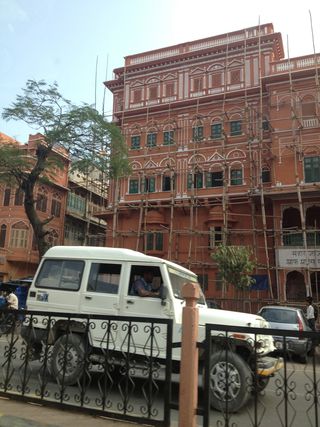 We arrived a Hawa Mahal, the Wind Palace near the center of town. Stunning cannot begin to describe, the intricate beauty of the palace and its Mughal architecture. It was built in 1799 C.E. It is five stories high and is called the Wind Palace because of the intricate lattice work, arches, and courtyards that allows the wind to circulate throughout the palace. 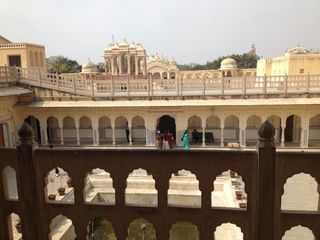 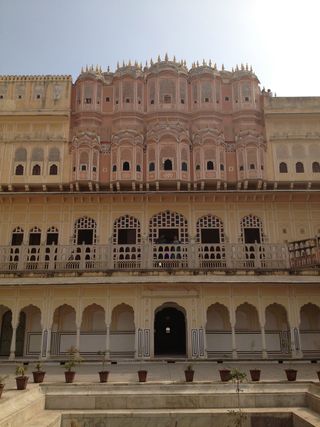 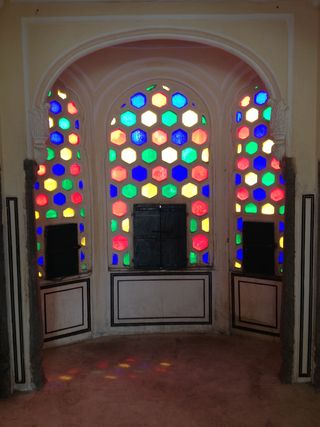 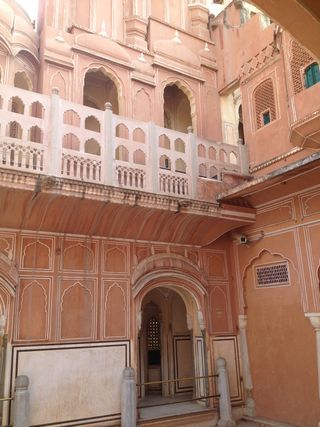 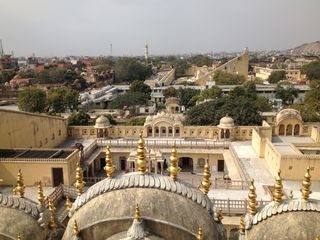 We spent about 45 minutes at the Hawa Mahal, then went to lunch at the L.M.B. Hotel, a resturant famous for its Rajasthani food. Shriya was last at the resturant eight years ago and the quality of food had not gone down since then. The food was very rich, but very good. Following lunch, we had to hurry to get to the Indian Institute for Craft and Design for my talk.

The Ranjasthani Government established the Indian Institute of Craft and Design in 1995. Its original intention was to provide educational opportunities for the children of craftspeople so that they can go into design. While providing lots of opportunities for craft peoples from all over India to work with IICD staff and students, it has not met the goal of enrolling lots of crafts people’s children. Partly, they say this is because the children do not wish to leave home and in some cases the parents refusing to let especially the girls leave home. 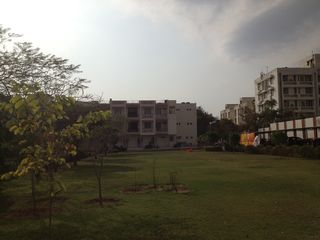 They were currently working on a project for the Mumbai airport in which they had invited Tamil Nadu terracotta artisans to design and build large-scale terracotta elephants, horses, and figures. 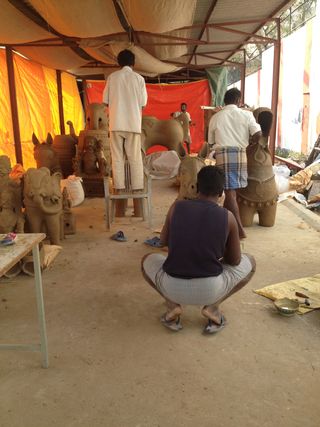 They do lots of projects for the Federal Government. When meeting the director, I learned that there is a tangible origin to the concept “government red tape.” In India, documents that are transferred between the government are wrapped in a red ribbon with a folder for the documents and a pocket for the cover sheet. Who knew that red tape was a real thing? The talk went really well with lots of interesting questions from students and staff. Their work is the closest to the essence of Cultures-Based Innovation. Swati, one of the students, showed me her final project for her diploma. All aspects of CBI were present in terms of extensive documentation of the process and meaning of embroidery and beading for the craft community of her focus. She had to produce a tangible prototype of "new" designs based on inspiration from cultural heritage and five digital design concepts. She had to work with crafts people to implement the designs learning about how their process impacts on what is possible. The areas of gap were figuring out the business models to make it a sustainable enterprise and a clear articulation of how the benefits go back to the craft communities. They did indicate that they plan to start an incubation center to support the manufacturing of student designs and the establishing of craft-based design enterprises. The IICD has the potential to be the best institute for research partnerships in CBI in India.

I will write more about what Cultures-Based Innovation means in an India context once the tour is over, but there are some consistent themes that arise from the questions that I am receiving.

After my talk, the director dropped Shriya off at home, which was on the way, and me back at the hotel.