The first day of adventures in Pune, India

So I have spent about 48 hours in Pune, so all disclaimers about not knowing anything about Pune and India apply.

Pune is a city of about 6 million people that was established at the intersection of the Mutha and Mula rivers. Similar to Mumbai, it is a city under constant construction as roads, mid-rise residential complexes, and high rise offices being built on the parameters of the town and in-filled. Yet it is not "over built" in the way one thinks of Beijing. For example, the acres of mid-rise residential buildings are only renderings on developer's advertisments instead of being dotted on the landscape. 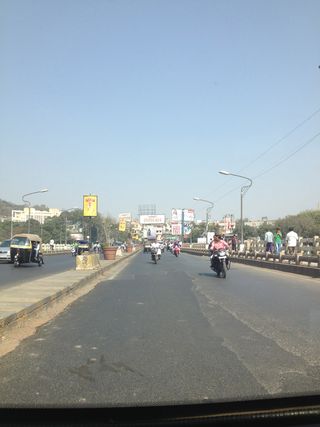 Arrived from Pune airport where we walked directly off the plane into the airport. This was a bit of a shock only because it would never happen in the US at such a fairly major airport because of fear of law suits. I knew now to catch the pre-paid taxi. There was a bit of a worry when the tout outside took my information and told me to wait while he hopped on a motorbike to get the cab. But after rejecting other taxi suitors, I got into the taxi and was droven to the Vivanta Hotel, owned by the Blue Taj group.

Luxury at the Vivanta

The Vivanta is a five-star hotel although not international five star because the bathroom and the toilet are not separate rooms. It is definitely five-star service. After passing through security (the car being examined and then a walk through of a metal detector), no more than five people were set to help me check in. The first was the lady at the counter, the second was porter who took my bag, the third was the man who brought me fresh mango juice (yummy), the fourth was the concierge who asked me to let him know if I needed anything during my stay, and the fifth was the young woman who chit chated with me, escorted me to my room, and explained how everything works in the hotel. It is moments like this where I realise I am not a five-star hotel type of girl in the sense that I feel nervous and frankly embarrassed by having five people catering to my needs within a span of 1 minute of meeting me. I keep thinking that I will get used to it, but I never do. 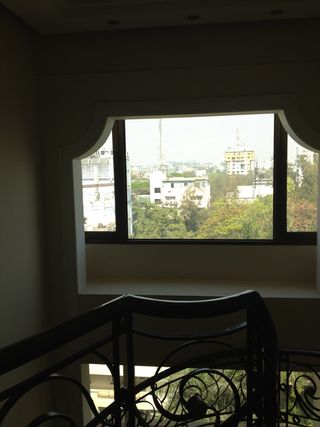 The hotel is beautiful and overlooks a park. It is a lovely stay.

But the point of coming all the way to Pune is to see Sudhir Sharma and catch up on how he is doing. Neha, a lovely young woman, who works for Indi Design meets me at the hotel. She is very smart. We chat about her experiences with the Masters of Design Ethnography program at University of Dundee and living in Scotland versus London. In her estimate Scotland is more like Pune, London is a place of culture shock. I realise now that I should have taken a photo of her. I am such a terrible visual documentarian.

We cross to the other side of town and arrive at Sudhir's office. The office has a warm and creative feel to it. The staff range in ages but seem to be mostly young people maybe five years out of university. There are four main spaces that I can see upstairs and then a large gathering room/presentation room in floor below. 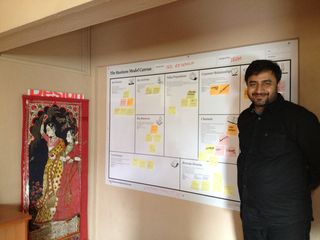 Sudhir with the Business Modeling framework that he uses with clients

After greeting Sudhir and chatting a bit, the entire office comes downstairs for me to be interviewed. I mostly talk about my history, what is design anthropology, what is Cultures-based Innovation (giving away a lot of my talk), and then had an interesting discussion about the biggest challenges facing the work that Indi Design does in Pune.

The first answer given was about the lack of money that people have to spend on products, services, and brands. Another person said it was not the lack of money, but a lack of understanding about the value of buying certain things. How as a company Indi Design needs to better communicate the value of buying things. Then the discussion shifted to corruption being a challenge. Here I'm afraid a launched into a mini-lecture about how there is corruption everywhere; the challenge is finding out how to reduce the negative impact of the corruption on everyday people's lives. The conversation evolved in terms of what Sudhir mentioned as people's awarness of small corruptions (paying a bribe to the police to get out of a speeding ticket or to the post man to get your holiday letters) versus big corruptions (real estate deals and public policy) and that the small corruptions are considered part of tradition. I posed the question of what if it is not seen as corruption but rather part of expected service culture. For example, I am expected to pay a tip to the porter who takes my bag or the taxi driver because of the personal service they have provided. If one cna change the perspective on this "service tradition," then one may come up with different solutions on how to address it. One maintains one's critique because it gets at issues of fairness, but then by seeing it as something to be mediated as opposed to destroyed (unrealistically, one might add), then one can put structures in place to make the practice more fair. We speculated on what that would be. The conversation ended with a discussion of what is Indian-ness. Sudhir's clients want to be global players, but they want their brands to convey a sense of being Indian. In a country with as much diversity, how do you define what is Indian? This is where I think the Cultures-Based Innovation focus on values, not motifs are important. You can have multiple expressions of a value, but the value is what is shared among all.

After more in depth discussion about Indian cultures, we had to leave for my talk. Luckily, in the car, Sudhir had raised some interesting questions about Cultures-Based Innovation. What does it mean to India as another Western term? What is it trying to achieve? This allowed me to pitch the talk to the audience. (I will post the talk later, once I have finished the tour.) But the talk was about in a nutshell:

Innovation should not require that you break from the past or innovate as an individual or organisation. That old ways of knowing can and are a powerful driver of innovation. The CBI seeks to provide a language to talk about these kinds of innovation that are already taking place around the world, but are not recognised by governments and organisations. Then I walk everyone through the Smart Art project as an example of CBI. The talk went over very well I think. There were lots of head nodding in agreement, and we had a nice exchange of ideas in the discussion. We got back late from the talk. I ordered room service, Chinese this time, and went to bed.

Okay, I've run out of time...I will continue the rest this evening in Ahmedibad.