Walking in Beijing and the park

Yesterday morning I felt the need to venture off campus. CAFA is in the Chaoyang area of Beijing. This area is near the 4th ring road and boasts one of the highest real estate prices in the city. I went for a walk first around the CAFA sport fields, to a park nearby, then to the IKEA store, and back.

The pollution was extremely high yesterday so I wore a face mask as I walked along. It is interesting how wearing the mask cut me off from people. People looked at me and especially my five finger shoes, but did not spark with human acknowledgment. This is different from when I am not wearing a mask.

I left CAFA around 10:30am. So in the park were parents and grandparents with small children. There were several children playing areas with painting, bouncing castle, toy cars, and a small merry go round. It was remarkably equal in terms of men and women with the children, who were mostly toddlers too young for school.

There was a group of about six older women (50s) who were practicing their ballroom dancing skills. There were two older men as well but they practiced on the side. There is a popular ballroom dancing show on Beijing TV. They even have people in wheelchairs dancing.

Further along, there was a couple practicing by themselves. They were doing the ballroom style of tango. They seemed to be pretty good.

I kept walking through the park. There is a tennis club with indoor and outdoor courts. I was looking for a swimming pool but it was the shelter for the indoor courts. You could hear the whup of the players hitting the ball.

I walked pass the courts to what was called King's Club. It was a private club with a restaurant and spa. It seemed really swank from the cars parked outside.

I walked through the high rise apartment estates of which there are several in the area. These can be a cluster of six to eight residential towers of 24+ floors each. Some of the lower floors have shops.

There were few people walking or biking on the road, maybe because of the pollution. I walked to the side of the ring road to IKEA. It was mostly because I was hungry for lunch, but to also see if it was different from the ones in the US or Australia. It was the same except for the photos in the families in the living tableaus were Chinese.

The lunch room was packed. Here there were some accommodation to local tastes in terms of the hot foods, but more in the next post. 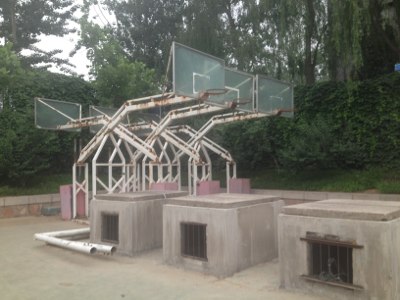 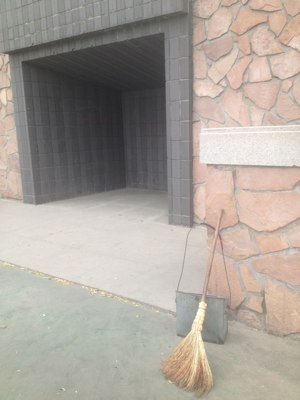